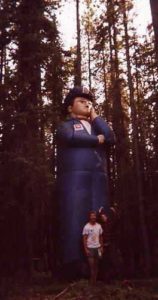 Here is a infamous Maytag Man story from Grande Prairie, Alberta sometime in the late-ninetys.

It was a road show bush camp project about an hour south and in to the bush from Grande Prairie. The crew had been working hard, and making good money. They had gotten to know each other over the last few weeks. This was going to be a gib and fun night off in the city.

I think they crew spent the night in the Moxies lounge. Apparently, they had nice waitresses there. I’m sure they ran up a huge tab, likely playing “boat people”, and they shut the place down. Entering the streets, they saw the prize – a 30+ foot tall Maytag inflatable on top of a roof. They had to have it.

I think I know who did the dirty work, but it really does not matter. They got the Maytag man, his fan unit, and took him home to camp the next day where he was inflated (pictured).

Apparently, they had their way with him. I’m told that some of them climbed inside his head and hot boxed it. This is all hearsay, of course.

As the days pressed on, the crew learned that the local radio station had picked up the story and was pleading for the return of the Maytag man. So, they started making plans for their next day off.

When their next day off arrived, they took the Maytag man back into town so they could execute their plan. This is how it played out.

The crew van, which had heavily tinted windows, was parked nearby and packed with brushers. They waited. Then the radio station van pulled up. Listening to the radio, the crew heard a “patched in” story from the field reported. “This is _____ from Sun FM onsite for the recovery of the Maytag man.” They nearly died with laughter.

I visit the Maytag man every time I’m in Grande Prairie and have a chuckle.