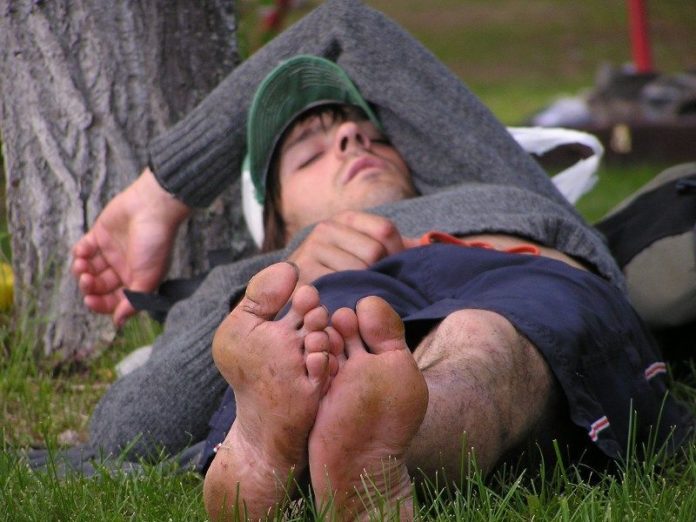 What’s the difference between a rookie and a vet? A lot, but mainly it’s how each approaches their day. Although good technique and stamina goes a long way in tree-planting, it’s of critical importance not to spend every waking moment telling yourself how much you #%^@ing hate your job and your life.

Day after storm for the Rookie:

I woke at 4:30 a.m. to darkness and zero degree hail, and three dogs tearing at the seams of my tent. I exited my tent, cursed the dogs, cursed life, and went to dry my clothes, which were drenched from a combination of last night’s rain and my tent’s structural instability in the face of a storm. I spent an hour huddled with my long underwear, work shirt, socks and boots next to a woodstove which took ten agonizing minutes to light and did little more than give false hope of real warmth. I then ate breakfast, made myself a Nutella sandwich for lunch, poured myself a canteen of yellowish-brown water, and spent the next eight hours freezing and vomiting on a clear-cut swamp 200 kilometers from the nearest town, earning the same wage as I would have back in the city.

On the way home we stopped our bus twice; once for a mother black bear and her cub crossing the road, and once so a quarter of our staff could smoke up. It made us thirty minutes late getting back to camp, which was terrible for me because I had to shit so badly. Arriving at camp, I shit, bolted to my tent, threw on the warmest/driest clothes I had left, and trembled in my sleeping bag until the dinner horn went. I ate dinner, sat around a campfire until the mosquitoes got really bad, and went to sleep knowing my tent would probably collapse again that night. I hate my life.

Day after storm for the Vet:

I woke at 4:30 a.m. to darkness and zero degree hail, and three dogs tearing at the seams of my tent. I ran outside in my underwear, picked the yelping sons-of-bitches up, opened their owner’s tent, and threw all three of them in. I took a moment to savor the curses rising from the tent, but I was freezing my ass off, and because my tent had collapsed due to last night’s storm (fuck you Coleman/Canadian Tire), all of my clothes were soaked. I tied them around the muffler of our bus (which, when they warm the bus in the morning, has the same effect as taking clothes directly out of a dryer). I crawled back in my sleeping bag, ignoring the fact that my hands were blue. My alarm went off at 6. I bolted into the mess tent, grabbing as much GORP as I could get away with, crammed my mouth full of sausage, bacon, and yogurt with granola, made a lunch consisting of 4 sandwiches, carrot sticks, brownies, cookies, two apples and a pear, and ran back into bed. 6:55 my alarm went off again. I ran out, untied my clothes (burning myself slightly), dressed, grabbed my gear, and hopped on the bus.

While most people struggled with rain-gear (it was pouring), I said fuck it, planted in my long underwear and .99 cent “MC Hammer: Please Hammer Don’t Hurt “Em” Value Village sweatshirt, and put in 3500 by day’s end. Driving home I popped a quick squat off the side of the road, thanking God someone had some leftover TP. At camp I bolted to the mess tent while everyone else made for the shitters, made some killer hot chocolate, threw a football around for a while, and then had thirds at dinner. I played some poker, smoked a little, and crashed, looking forward to tomorrow and then day off, $300 richer from last night.