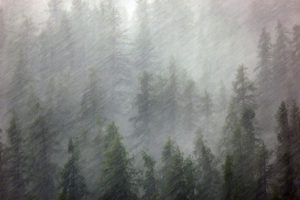 SO this one time at tree planting… my crew was in the unenviable position of helping another crew finish their assignment on time, but we all bought in to help fellow planters out.

Since it was a fly in everyday job we were really excited as the majority of us hadn’t had a flying job that year. Bonus was we had a great campsite just on the east side of the Alberta Rockies where the view was fantastic. We planted our days with enthusiasm, but with only one helicopter we were the last in… last out … so that everyone got full days.

We were working away planting a bunch of trees when the weather started to take a turn for the worst. It began to sleet and snow so with us being the last in last out crew we had about an hour and half before we would be picked up so we continued to plant as any highballer crew would do. The weather changed for the worse at about 4:30pm and the pilot refused to return to pick us up.

We started to get things together for a “night out on the mountain” as we started to make a fire and collect wood when a helicopter magically came over the ridge to pick us up at about 9:30 in the middle of a mountain storm. It was after that day that I knew planting was my calling.