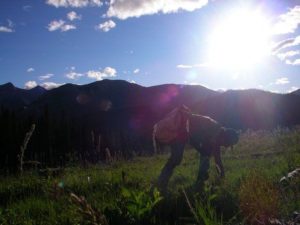 This is a rant I have been composing in my head (or preaching to friends after a having a few) for the past year or two. To set the stage, I would like to tell you about two of the inspirations for the rant. First off, when I saw an article about tree planting in the well-known magazine VICE I was initially excited, but after reading, I was disappointed with both the tone and content of the article.

“At a party recently I overheard a bright-eyed bushy-tailed 20-year-old looking dude talking way too excitedly about the job. I ran into him in the bathroom line and surprised the hell out of him by guessing that he was going into his second year of planting. I in turn, was completely unsurprised to learn that he plants for one of the shittiest companies out there in the worst possible province. Idiot.”

“Canada is a natural wasteland. Logging roads form endless mazes to the middle of nowhere, logged barren blocks stretch as far as the eye can see, and countless smaller ones litter the landscape. Tree planting is pretty near the bottom of the rung in the mega empire that is the forestry industry. Most forestry workers, like loggers, get paid a hefty living allowance per day for working in remote areas, but not tree planters. Tree planting is conveniently targeted at the precise age group that is stupid enough to actually pay camp costs of at least $25 per day just to be allowed to plant.1”

Second, after reading this and feeling substantially irritated, I found myself at a coffee shop, looking at the counter with the cream, sugar, lids, etc. In this overly-hip, self-indulgent roasters, walls were lined with coffee-related trinkets made of metal, glass, plastics, and any other non-renewable and unsustainable material you can name. On the counter, there were heaps of disposable plastic lids for take-away coffee cups, and next to them, a small stack of paper napkins with a guilt-ridden sign above them that stated “we like trees, please use sparingly”. Young Billy is a rookie tree planter. A cockeyed optimist – he’s ecstatic about getting into the environmental science program at a prominent Canadian University. What a chance to save the World? To supplement his parents’ contribution to his tuition fees, he endeavours to pursue a challenging but rewarding outdoor summer job. An older student in his program tells him about tree planting, and the joy and cash to be had.

Perhaps one of the greats of literature could summarize his experiences in paragraph, but alas, I cannot. Needless to say, they were formative. He went out west, he planted, he partied, he packed ‘er up, and he came home. And truth be told, he did well, placing second in the competition for the illustrious position of Rookie Highballer. Upon returning to his school life, Billy regaled his friends and colleagues with stories of hardship and environmental revolution. His pride in his accomplishments as a young tree planter beamed in his eyes throughout the year. And despite the tone of cynicism in this prose, his pride was an honest, and to be fair, well-deserved manner. Loo is a pounder; he’s been planting for seven years. He highballed his crew the past two years, and the whole camp the last. When the wind blows, his dreadlocks shift ever-so-slightly, revealing a seasoned planter’s thousand-yard stare. He’s tough as a brick shit house, and while setting up the bush camp, is one of the few individuals who actually volunteer to build the camp shit houses.

Loo burst from the womb of undergraduate education into a harsh and bitter workforce, tried to carve out his piece of the pie, but was utterly indistinguishable from the sea of arts majors looking for entry-level positions. He continued to plant; he went coastal – planting trees during the late winter and early spring in coastal British Columbia’s unforgiving terrain – he travelled the world; he collected employment insurance benefits in the off-season. Vinnie’s gone-but-not-forgotten years spent tree planting and running a crew of his own have instilled in him a deep-seeded love, hate, and most of all, protectionism of tree planting. Also, after years of study and employment researching issues of sustainability, resource management, ecology, and climate change in forestry, he found himself wondering about the public perception of Canadian forests and forestry by his generation. When he speaks with colleagues living in the two major urban centres where he claims residency (Halifax and Toronto) and reads the seldom-occurring tree planting literature in the popular media, he notices a striking disconnect between facts and perceptions of forestry and sustainability.

Incidents relating to this kept flashing into Vinnie’s mind: happening to drive past an open-pit coal mine and a clear cut in the same day and having a friend consider them both permanent destruction of the forest; hearing a someone say practically in the same breath how beautiful he thinks a farmer’s field is and how disgusting he thinks a clear cut is; reading an article saying that Canada is a natural wasteland and how well to do loggers are compared to tree planters within the same forestry mega empire.

And so he rebuts. Wood is a sustainable resource and fossil fuels are not – forests grow back and coal doesn’t, or at least not at any rate that we’re concerned with. Forestry, unlike agriculture, is one of the very few land uses that doesn’t cause deforestation, as there is a vested interest in trees growing back. Forestry workers are some of the most marginalized labourers in Canada and forest-dependent communities some of the most impoverished. If you need proof, ask workers and civilians in Port Hawkesbury (Nova Scotia), MacKenzie (British Columbia), Grand Falls-Windsor (Newfoundland), or any of the countless other small towns that have suffered recent mill closures. Last and most enraging of all the above points: Canada is so unbelievably far from a natural wasteland that the statement is laughable. I don’t even know where to begin, so I’ll just say that there is 1,198,160 km2 of protected area in Canada – 12% of the Country. There is 3,100,100 km2 of forest and 800,000 km2 of forest that isn’t even touched by forestry – there is a forest in Canada bigger than Mexico that is not harvested. In conclusion, after studying forests and environmental issues for six years and working on them for three, I will be the first to tell you that there are major threats and on-going challenges to the sustainability of forestry in Canada. Not the least of which are the practices of large forest products companies. And to address the opening coffee shop/napkin statement; using less stuff is a failsafe way to live more sustainably. But, there is a major overestimation of the extent of these issues, particularly with the younger generation and the urban population – both demographics to which I belong. And hey, tree planting is what got me giving a shit about all these issues in the first place!