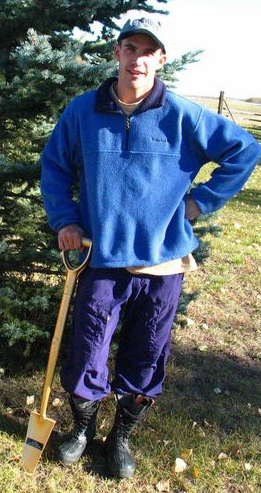 He gave some hella good tips last season, proves he’s into the business with no selfish desires. Thanks Kenny, You’re the man!

I write this to those planters interested in a very very small piece of tree-planting history.

I began planting in 1986 in Likely, BC. I continued planting throughout the 1990’s, and have completed my 15th year this past June. I have planted for more than six different companies, in three provinces, and am very near the 2 million tree mark.

I started my day at 3:45 am. I had Madge prep, sandy soil, and sunny mild weather. I cached up my area the night before with 95 boxes, each containing 170 PRT Red Pine seedlings. I had two planting bags, four shovels, three pairs of boots, and light containers of food. I calculated how many trees per hour I needed to plant in order to hit 15,000+ before night fall at 10:30 pm. Excluding the down time for bagging up, watering, and eating, I planted an average of 980 trees an hour.

I had been in touch with the Guinness World Record Company in London, England in February of 2001. In other words, I had all of their rules, and restrictions satisfied. The event was captured by CTV national news, and aired on the 11pm news June 30th. Two local newspapers covered the story. Ten witnesses signed a form and statement recognizing the legitimacy of the event.

My good good friend and fellow veteran planter, Mike Nun, pursued his personal best that day. By the time the sun went down, Mike put 13,600 seedlings into the ground. I squeaked by @ 15,170 seedlings.

In all our years, Mike, Curt and I have always been high quality, high number planters. I know of many upstanding planters for whom this goal is not implausible. Setting the record is never an impossibility, or a pipe dream; just an issue of the right place, right time, and right circumstances. Anyone with the right technique, stamina, and (most importantly) character can pursue it. I believe 16,500 is possible. And it will happen under the right eyes someday.

I still find it difficult not to return for a week here or there during the summer months. And it isn’t for the money. I have a ‘real job’ here in Los Angeles, Ca.

To those people I’ve heard saying, ‘Get a life’,…I can only hope someday they’ll find and understand what it’s like to truly love something. When you do honestly care, be it your work, somebody, something,…why let it go completely?

I am not ashamed, and never will be to say that I am and will continue to be a tree-planter.

Straight Plant Record: 10,200 trees
Prepared Ground Record: 15,170 trees
Just to add to Kenny’s nomination, he also likely holds the record for planting mounds at 8200. His total life time number has exceeded 2,200,000. He is presently involved in the filming of the Tommy Douglas story in Regina. His position is Casting Director. Once the filming is over I’m sure for a break this summer he’ll have to get back out to plant a few more.

Nominated by: Cassie and Tyler

Kenny planted the most direct and prepared land in a single day (2 separate records). Not only is he the most determined planter yet, but also very down to earth.

Just in response to Hugh Gilmour’s letter criticizing Ken Chaplin’s feat. Just so Hugh gets the facts correct, yes Ken did have family there, but no he did not have anyone bag his trees. It is too bad that Hugh has to try and take away from what Ken accomplished. Oh and I know Mike, a great planter, and I guarantee you that Mike would love to have that record. Come on Hugh get the facts correct! It wouldn’t be a record if someone bags you up.

Kenny’s got the record fair and square. Anybody who says different can argue with Guiness. He’s a hell of a planter and a good guy to boot. The few times I had the chance to work with Kenny were great. He was as hard working of a planter doing his “cameo” appearances as any career planter ever was. Not many guys stay until dark to get their personally set quota when the money doesn’t matter, but the personal victory does. Sorry Kenny I would have put you in front of Nunner but that bottle never made it…lol.

Easy now Jocelyn, There is no possible way that I can take anything away from Kenny’s achievement, Ken is the champ, the record holder and all of this is well deserved too. Ken is also one of the nicest guys you could ever hope to meet. It was a pleasure to have Ken back at Smokey lake this year where he put his skills to use training our rookies in the most professional way. Thanks Ken!