Should Tree-Planting Become a Medal Sport, Here’s Your Winner 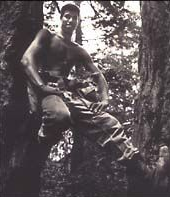 By Susan Enfield, Outside Online Magazine

Looking for some real athletes? You know, the kind without massage therapists and sports psychologists and closets full of shoes? Good, because rather than wasting energy running in circles or lifting heavy objects and putting them right back down, the beaux ideals pictured here derive their strength (and, some might argue, their character) from simple workaday tasks. They rise every morning, punch the clock, and then spend the day squatting, lunging, curling, and sprinting. All for a paycheck that looks, well, real.

Just another morning in a British Columbian clear-cut. Yuri Tricys digs a hole, bends over to wedge in a baby tree, straightens up, hikes three yards, and does it again – as he will 1,200 more times in the next eight hours. It’s a routine that earns veteran tree-planters like the 24-year-old Tricys some seriously solid abs. Rookies, however, generally earn little more than “gurgly gut,” a gaseous excess caused by extra air breathed in during bending. Paid between 20 and 60 cents per tree, the six-foot-six 200-pounder must maniacally sprint up slopes carrying 45 pounds of seedlings, pausing only long enough to cram in a few of the 4,000-plus calories his body incinerates daily. Kinesiologists who tested a crew of top planters a few years back were amazed to find their subjects sustained heart rates of 135 beats per minute, about the same as some poor schmo pedaling hard on an exercise bike at the gym, for eight solid hours. In fact, according to Simon Fraser University kinesiology professor Eric Banister, planters often suffer symptoms of overtraining, among the most common maladies of endurance athletes. Thus Tricys is prudently taking a hiatus this fall to study nutrition at Langara College in Vancouver, where his opponents on the basketball court will see that the forest wasn’t the only beneficiary of his labor. “My vertical leap, speed, and endurance have all increased significantly,” Tricys says. “A basketball game doesn’t seem like much of a workout anymore.”