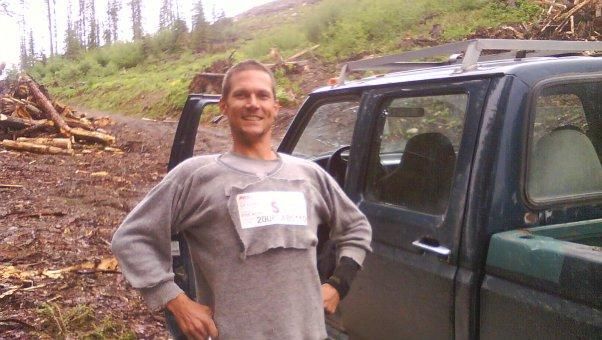 I have planted over a million trees, which in itself is not an extraordinary task, albeit a difficult one; My story goes much deeper. In 2004 I was planting, in my ninth year, with a crew on a contract in Stewardson logging camp. We barged the trucks in and flew the trees in by chopper, to perform the standard three week job, on the outside of the island. It was sometime in April when one day I got the worst pain in my gut I’ve encountered, I mean I know pain, and this had me dead to rights, done.

Being the stubborn one i am, i toughed out a week of gut wrenching pain, constipation, starvation, and still managed to plant a couple bag ups, without being able to eat, drink, sleep or internally move anything the entire week. It would have cost a few hundred bucks to fly out, but being the proud fool i am i chose to wait until we barged out as a group, when the job was done. Jerry C., one of my favorite foremen ever, tried to talk me into the flight but i made it until the end, and went to the hospital at 5 am the next morning.

The Doctor in the Alberni emergency room, did some tests, looked me over and said I had constipation, but in retrospect that was the beginning of things to come for my story. I continued planting through the months of may, June and July before getting some unavoidable summer time off, all the while wondering if I had hit the proverbial wall. Burn out, as my production, energy, and motivation were waaay down. Troy R., my good friend talked me into some surfing in tuff city, and since planting was on summer break, we hit long beach hard. Six weeks later i couldn’t figure out why i couldn’t surf, having been in the water twice a day for ever, stronger, versed, and rehearsed, but just weak assed. I had developed these ‘fat legs’ as I describe them, which acted like I was full of water, and wouldn’t go away. I was lacking energy, but didn’t feel bad at all.

Then in September I went planting again for the final show of the year with a new crew and some old school vets, and some fantastic money. My fat legs got worse, but half assing it was still more lucrative than any job I’ve seen and it was a real treat to be a part of that wonderful fall contract in 2004. I was soon up to my armpits with this fluid that just wouldn’t go away, all the while making the best money of my life. I was mid-balling the highballer heavyweight crew, with which my ten years experience were rookie status, hardly denting the hundred years of experience in the four other planters in the truck.

So at the end of September, when the job of jobs was done, i once again returned to the Pt.Alberni Hospital’s emergency room to see a doctor, this time his answer was quick and painful. You have to drink this because your potassium level in your blood is critically high, you have kidney disease. You should go see your family doctor, and get referred to a nephrologist right away. I know now that the earlier episode was the beginning of my disease, but because my kidneys were only beginning to be destroyed, and still had good function it was not detected in the blood tests performed in April.

So, in 2004 my career was ended, and my new path was laid in stone. I fought for a year to save my kidney function, only to reluctantly begin hemodialysis in 2005. I went to see the transplant team in Vancouver, and they told me of the ten years I would wait for a transplant in BCs. In 2006 an opportunity came where I was able to learn how to take care of myself, at home, and have done so ever since, overnight while I sleep. Dialyzing overnights is better, longer, and frees up my daytime’s, instead of spending it in the hospital. I have a more liberal diet and do not have to worry about fluids as much. It works so well in fact that i n 2008 I victoriously went back to the block, planting locally. Here in the Kootenays, this is only a two month season, a vacation compared to the nine month marathons I had endured for eight consecutive, grueling years. I returned again in 2009, and will once again, plant in the west kootenays for as much as I can get my hands on during 2010, while I am leashed to my home, and my artificial kidney.

I realized a little while ago i WASN’T burned out, washed up, OR in need of a break from the job I love…. I wasn’t hitting the wall or in need of a change, I was dying and didn’t even let THAT stop me, but boy did it ever slow me down. I managed to survive the absolutely defeating loss of my kidneys all while planting for the five months, and now without kidneys, continue to do so as much as is possible while unable to leave my home.

I have calculated that by averaging 1000 trees per day for the eighty days I have worked in this condition, i will be passing the 100 000 tree mark this spring with out kidney function. I haven’t met any other disabled treeplanters, nor have I heard of any and if my story isn’t good enough for you I can email you my numbers from the last two years, and the five to come, as my transplant isn’t scheduled until 2015. I AM a lifer, and remain committed to the job I love and respect, even throughout this life changing ordeal. I will eventually become the first treeplanter to receive and plant with a kidney transplant also, it is just a question of when. The question I am most interested in will be how many trees will the next kidney last?…..

My name is not important, for I was never interested in the GLORY. I trust that all who care to know about the story will eventually come to know who this is…..I would just like to dedicate the honor, should it be deemed worthy, to my mother Carol, my sisters Erin, Becky, Sharalynn, Elisa, my girlfriend Hope, their children, and my step father David and brother Dee. Their love and support continue to give light to a very dark night. I also wish to mention some of the companies who have provided me with a door to the world | love and respect; Wilderness, CoastRange/NBR, Rainforest, Blue Collar, Shas, A&G, Greenpeaks, Evergreen, Wagplant, MacLennon,

I am happy to report I received my transplant ahead of schedule, Feb 26 2011. All has went wonderfully well since the transplant, I have been given a 2nd chance at life, and I intend on making the MOST of the opportunity. I too was fortunate enough to get my spot back on my old crew and am headed back to work to begin March 2012!!!!!!

I am proud to be given the opportunity to return to the job I love, the people I MOST relate to, the work environment I adore, and to join a very exclusive club of disabled->transplanted treeplanter(s). I feel it is a testament to RECYCLING, to the generosity of strangers, the wonders of modern medicine and the lessons learned FROM planting, that I return to it. – one step at a time, do what you can and never give up.