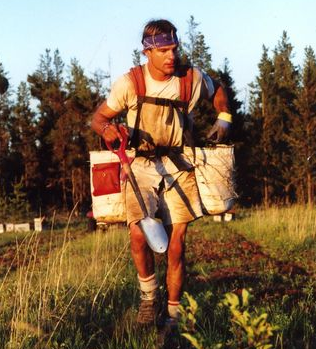 I am truly honored to be on your lists. Just to keep the facts straight, I planted my 2,000,000th tree in 2000. Since then, I foremanned for two years and spent a few years looking for waves in Australia. I got home last June and planted a few sporadic shifts but now am back planting a full season, full-on. I have lost count of how many seasons I have planted, over fifteen I know. I will always plant trees. From the simplest of tasks come the greatest revelations….

I just want to put in a nomination for Big Mike. Mike is the guy who got the whole ‘world record’ ball rolling, although now he might not be so inclined to celebrate it. Not because of the amazing feats of tree planting endurance it took but because now I think that Mike thinks that treeplanting isn’t about records or how much money you can make in a day, to me, Mike has truly embraced the art of the thing as well as the athleticism. Mike remains one of smokey lakes top quality planters and is an inspiriation to the many rookies who joined our company this year. Here’s to Mike, not for the numbers, but for the spirit!

Mike is one of the best there is and was, i think to date he’s put in 2 and half million trees which is amazing. He plants amazing quality and has high expectations for himself and puts forth a solid effort on a regular basis. Easy to please and rarely complains.

As a rookie at Smokey Lake, Mr. Nunn taught me that treeplanting is not about numbers but planting those little trees so that someday they’ll touch the sky! Mike loves the fresh air, the exercise, and the comraderie of planting, but most of all he loves Curt Reid, his muse. He is an inspiration to us all!

He is a fast TREEPLANTER! A legend!

Has planted for 15+ seasons. Planted over 12,000 good trees in a single day. Has planted around 2.4 million in his life and most importantly cares about his trees.

Mike helped me fill my water jug on my first day as a rookie with Olsen Ventures, and was always very patient and inspirational with everyone! A legend – for sure, humble – Always!!

Mike Nunn has been planting for something like 20 years, and is the hardest working, nicest guy ever. He looks like a big californian surfer and he’s just as laid back as one. Except when it comes to working… He is always first one in and last one out. He works in Saskatchewan, where the land is often nice, but requires one to move really fast to make good money. He is a legend in Saskatchewan for his speed and good quality trees.

The Nunner is a stunner…a rare combination of speed, grace, and beautifully planted trees…most importantly, he is completely devoid of the snobby highballer attitude-a friendly, jovial, prince of a man who has made our treeplanting careers that much more enjoyable. Peace out, bro, and good luck to you!

As you will notice this nominee has a lot of people cheering for him. That’s because he’s a hell of a nice guy who plants trees at about a 99.9 % quality rate! The first time I met him was on a badly priced fall contract (goooo team mud !!) where he was nothing but a machine. His reputation preceded him for being a highballer but on the block he was the guy you wanted to get trees to simply because he was always smiling and cheering you on. No complaints, top quality, constant production and great conversations make this guy a one of a kind hall of famer. Of the 6-7 guys on this list that I know personally he is the man.