The Vortex of Insanity 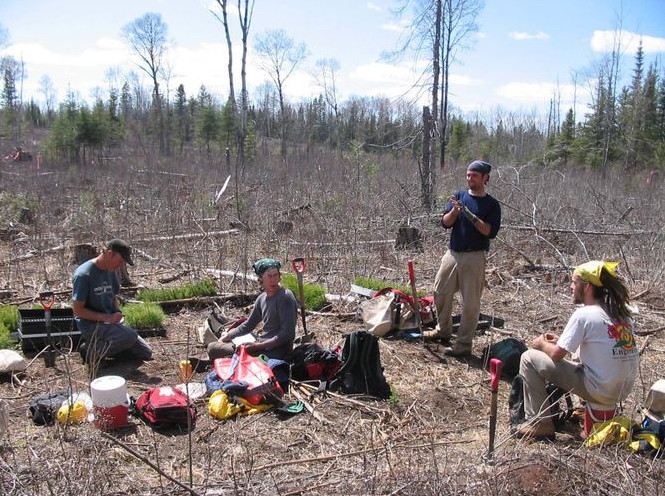 Early on an already warm May morning, day three of our cycle, a crewboss and four planters were asked to return to a block to fill in some “missed” sections. I was chosen to be one of the lucky five shuttled off in the wonderfully beat-up, unsafe, and leaking F-150 extended cab which I believe every reforestation company owns.

Early on an already warm May morning, day three of our cycle, a crewboss and four planters were asked to return to a block to fill in some “missed” sections. I was chosen to be one of the lucky five shuttled off in the wonderfully beat-up, unsafe, and leaking F-150 extended cab which I believe every reforestation company owns. My company leases new vehicles every planting season, usually beautiful 12 passenger Chevy Econoline’s with CD, air, and working heat, so this truck was obviously kept to meet the minimum industry standard of at least one totally unsafe vehicle per camp. I’m not even really sure if it was an extended cab, or some amateur after-market renovation of the cab, because there weren’t any actual seats behind the front bench, only a 3 foot wide space that had a couple of plastic bucket seats shoved into it. This F-150 was vintage though, and had all the personality you’d expect from a reforestation vehicle: it was old (definitely not having aged gracefully), had no tailgate (you were required to strap your bags and shovels to the interior sides of the bed), no ignition (the car was permanently hotwired), suspicious brakes (downward slopes really frightened me), every engine/coolant/gauge light on permanently (probably for legitimate reasons), and a completely unreliable starter. So after a cramped and somewhat odorous forty-five minute drive in the truck, we arrive at the washed out stretch of mud which our map seems to argue is a road. The ATV is rolled out of the pickup, and Greg, our crewboss, tells us he’ll drive us in on the quad in pairs. Two of us are left behind, so we tape our hands and wait for Greg to return. Forty minutes later he does – without the quad. Apparently we were given a quad that ran out of gas less than hour into our day. Terrific. Our options are to walk into the block (close to an hour), plant, and carry the trays out at day’s end, or, siphon gas out of the truck into a container, and then walk to the quad and fill it up. As every planter knows, walk-ins are the devil, so we chose to try and siphon gas.

There happened to be a “rustic” house/shed nearby (if you’re a Simpson’s fan, you might remember the crazy cat lady’s house), from which we stole a piece of garden hose lying outside on the ground. None of us possessing prior siphoning experience of any note, we unknowingly cut the hose too short for our purposes. We managed to get the gas flowing (into our mouths initially of course), but the hose was too short to maintain a flow from the truck’s gas tank into our canister. It took us about 10 minutes to figure out what our problem was. If you have never sucked gas directly into your mouth repeatedly over a short period of time, I can’t say it’s something I’d recommend going out and trying. Not only is the taste foul, but the reaction with the inside of your mouth (namely the roof of your mouth and gums) is akin to the sensation one receives from a severe rug burn. Having determined our hose was too short, we returned to the yard and cut ourselves a larger piece. Once again, our lack of siphoning experience became glaringly apparent. We discovered that while a hose too short only fills your mouth with gas, a hose too long won’t get you any gas at all. The suction required to suck the gas out of the hose length we had chosen was more than any of us could muster. As a twisted consolation prize for trying, however, we did manage to huff a lot of fumes. I believe that my three attempts sucking as hard as I could on that garden hose qualifies me for some serious gas huffing street credibility. I doubt there’s a junkie out there that could match the hit I took on my third effort. So with Greg and the other planter slightly high, and me stoned out of my mind, we gave up on siphoning and decided to just walk in.

I don’t need, in great detail, to describe the walk-in because it’s been done thousands of times by thousands of planters. Muddy, wet, long, tiring, and the first soaker of the day – everyone’s been there. I remember wondering midway through, however, why I hated walk-ins, as I was thoroughly enjoying that particular walk-in that day. It was more of an amble-in than a walk-in really, and everything was looking pretty damned peachy. A year later, I think I know why what two days prior was a terrible walk-in had become a pleasant stroll. I think it’s the same reason why you find some people are quite happy to sleep on heating grates in downtown Toronto. I think it’s that positive spin on life huffing gas fumes for ten minutes gives you. Whatever the reason though, I arrived at the start of our land in a terrific mood.

If at this point you’re thinking to yourself: Why do I spend my hard earned money on drugs/alcohol when huffing gas is pretty much free, and it worked so well for this guy? Well, because it didn’t really work out all that well for me. Although the high was enjoyable for a time, the chronic throbbing that began halfway through my first bag-up had by noon developed into a full out mind seizure. It was like nine hours of a President Bush State of the Union address at full volume crammed into spontaneous split-second bursts of pain and nausea.

So after two hours of planting in thorn bushes in my pajama pants (it was warm, so the numerous cuts on my leg caused by the thorns ripping through the flannel were perpetually being stung by my sweat), I got some terrific news. We were all going to hump trays over thirty minutes of thorny, hilly terrain to plant out the back of some god-forsaken piece somebody decided wasn’t worth their time. Guess what! It apparently was worth ours!!! The planting itself I can’t remember much of, other than feeling nauseous the entire time. Around four we finished the last of it, my mind and body crying for mercy. However, I’d somehow almost let myself forget we had to hump all those empty trays back out of the block with our gear, a walk-out that was now an extra 30 minutes longer. But it’s really not until we’ve walked 4/5 of the way out and we reach our abandoned quad that my day is REALLY made. Because it’s when we’re trying to figure out how to get the quad back to the truck that someone says “hey, isn’t there a reserve tank on that quad?” And yup, sure enough, there’s enough gas to last two days, or at the very least a couple dozen serious huffing sessions (which I was seriously debating at that point).

It was at that moment I had the most pathetic of all my treeplanting self-pity moments: Why in God’s good holy name did I turn down a cushy accounting office job with catered breakfasts and lunches and those $400 office chairs that adjust in every imaginable way? Why was I in Northern Ontario and not BCE Place in downtown Toronto? Why, at 5 o’clock p.m. am I humping empty trays and not heading up to my girlfriend’s house? Why will I have spent 12 hours of my day today working here in agony when it could be 8 in blissfully mindless comfort at home? Eventually the questions merge into one gigantic angry, frustrated, jumbled incoherent slur that races continually through my still aching head until we arrive back at camp: Why did I spend my day sweating into still bleeding cuts exhaustedly pumping eight inch saplings into the ground in Buttfuck Nowhere with a gas huffing hangover so some sleazy logging company can come back twenty-five years later to cut those fucking trees down I just about died planting today and sell them to the commercial whore of a nation to the south of us that will only slap NAFTA-violating tariffs on what they’ll term a softwood import that the logging company will turn around and use as justification for lowering tree prices and further fucking me and all other planters in the ass down the road?

Getting out of that cramped truck after the drive home, I was sure nobody in the entire world had it worse than I did. I could be the head monk of that Falun Dafa religion-yoga-TaeBo or whatever the hell it is thing in China, bust in on a Politburo meeting with a “Mao Sucks Capitalism Rules” t-shirt, and I’d still probably have an easier go of things. As I’m heading towards the mess tent I whine to Greg about the day, and he looks at me and says “You know, as fucked up a vortex of insanity day as that was, you still made a couple hundred dollars. And I think we’re having burgers tonight.” The hell of it was he was right (on both counts – we were having burgers). I also realized that as shitty as my day was, his as crewboss was probably a lot worse, and yet here he was listening to me bitch. I realized that just maybe things weren’t that rough after all.

That night I had the best four Aspirins and the best seven cheeseburgers of my entire life, and slept as soundly as a passed-out junkie. And today, nearly a year later, I can’t wait for the season to start again, because this time I know how long to cut the hose.