These Boots are Great for Plantin… (Zamberlan Vioz GT’s) 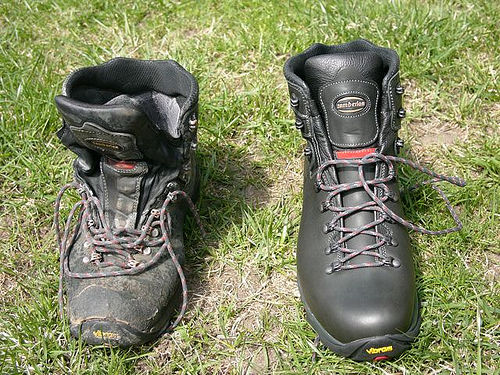 Here are a few pictures of my boots after a big season of planting. As you can see, they take a beating! These boots are the Zamberlan Vioz GT’s, and I can’t say enough good things about them. Light, comfortable, and durable. They are a little on the pricey side as far as boots go, but I wore them everyday last season and they will be going out for another year!

Some advice I would like to pass along is to:

I Shoe Goo’d the pair in the picture about 4 cycles in after I noticed the leather was getting rough on the toes and heel. Putting a good thick layer of Goo on before the boots see action will allow you to screef to your hearts content without worrying about putting a hole in them. As you can see, the tread takes a beating after repeated screefing. The hole you can see in the middle of the sole only happened on the second last day of the season. I plan on Shoe Goo-ing it up and running these boots into the ground for another season!